The Monitor Sphere - Delving into Deadpool 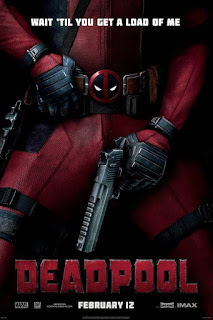 I didn’t think it would happen, I finally saw Deadpool, and only a week after it came out, which was a suprise to me because when I first heard talk about the Regeneratin’ Degenerate getting his own film I thought that I would probably Redbox it, or wait till it was able to be streamed, because I had zero intention of seeing this movie in theaters.

It is nothing against Wade Wilson, what I’ve read of Deadpool’s exploits I have actually enjoyed. Now, I have never really gone out of my way to pick up any of his stuff, but my interest was peaked when in Deadpool Team-Up he had an adventure with Captain Britain, and they had their nationalities switched. I also grabbed a whole bunch of the Brian Posehn issues because I enjoy that man’s comedy and the Declan Shalvey art in issues 15-19 was fantastic. It isn’t the comic’s fault.

It is also nothing against Ryan Reynolds, I like that man as an actor and have a good collection of movies in which he stars. I even told people I thought Green Lantern would be good because I had faith that he would make it work. Green Lantern is usually one of my go to answers when someone says “Oh you like Comic Books, who is your favorite superhero?” So I had high hopes for a movie that stared one of my favorite actors playing one of my favorite characters (although I am more of a Kyle fan but that is an article for another time) against how terrible all the previews looked because I knew, somehow he would find a way to do this character justice. It isn’t Mr. Reynolds’ fault either.

My issue is that if Fox can’t even figure out one of Marvel’s greatest properties in Fantastic Four, why does a character that is solely played up for laughs most of the time, that more people know about because of how “meme-worthy” he is than have ever actually picked up a copy of a book he’s been in to increase the sales of this dying medium, why does this son of 90’s comics deserve his own movie when there are a whole bunch of more deserving films out there yet to be made?

But I’ll be damned if the marketing for Deadpool didn’t win me over, from a billboard making it look like a Valentine’s Day romance film, to getting Betty White to review the film, they left no stone unturned to make sure me, and plenty of other holdouts like me, went and saw this movie and boy did we, as the movie has shattered some box office records.

So after all that fantastic work done by the work of the marketing team, and the buzz that the movie was getting from people that I trust, I was all excited when the opportunity arose grab a sitter for my daughter and drag my long suffering lady to see Deadpool in the theater.

Just like with last week’s Sex Criminals volume 1 review, I am not going to go scene by scene and tell you what I thought about every little thing in this movie, nor is it my intention to spoil anything big in this movie for those of you who haven’t seen in yet, that is not why I am here, I am just here to give you my thoughts on things in realm of comic books, which this falls under the banner of.

There were some things in the movie I really, really liked and thought were done rather well. The opening credits were a masterpiece and was something I was surprised anyone would willingly do in a film. The stuff in the taxi cab was a lot of fun, and I was glad they came back to it later on in the movie. The Stan Lee cameo was probably one of the most special things in all of Marvel film fandom, to get that man to say those things in that location got quite the chuckle out of me and, as they always seem to do, made me sad for the day when those cameos will no longer be possible. The “Bob” moment was a nice moment, as well as, a great little middle finger to the people over a Disney. Finally, the scenes in and around Deadpool’s powers manifesting were heartwarming, funny, and at points rather sad, they really ran the gamut of emotions and did them really well.

My biggest issue with Deadpool, was that I left the theater going “Meh.” From what I had heard from other people I was expecting to have been rolling with laughter but for me a lot of the jokes fell flat, they were sophmoric and really not all that funny, a lot like a current day Adam Sandler film. I was expecting a movie that, based off of articles I’d seen online, was “the best Marvel movie ever made”, and has had “Disney scrambling to find their own R Rated hero”, but Deadpool just left me feeling luke warm. If Disney is truly worried they don’t have to worry about me, because I left that movie wanting to watch Guaridans of the Galaxy again, which for my money is better film, and is legitimately funny.

I guess, in the end, I was right, Deadpool really felt like it was made for the people who know him from memes, and the videos of people that run around conventions doing disruptive stuff dressed like The Merc With A Mouth, as well as the people who actually do said things. Deadpool wasn’t a movie that was really meant for me, and in a way I am somewhat saddened by that because I would’ve enjoyed to have seen it through the eyes of the people I was sitting close to who were laughing at every single vulgarity, and smiling their way through all of the violence.

I feel like there is more that could be said but I am not sure at what point this would turn from a basic review of a film, to a rant against Fox Marvel vs Disney Marvel, and the people who are making a big deal about parents taking their children to this film/how many kids they had at their showing of Deadpool, and I really don’t want this to turn into a crazy man standing on a soapbox.

Deadpool for me is absolutely in the part of my list of comic book films where I group all the movies I could take or leave, it was certainly better than the hot garbage that is Trank’s Fant4stic, Amazing Spider-man 2, and X-men Origins: Wolverine, but beyond that I would probably group it with the comicbook movies I won’t see again unless it is already on and I don’t feel like doing anything else.

I would like to finish this off by saying thank you for reading and that any further discussion or dialogue on the subject of this article is appreciated but please keep it civil. Also, if you wish to write for CCtD please contact the overlord atop his mountain because I am sure he is always looking for more content.