“I like shorts! They’re comfy and easy to wear!” - Fleshing Out Your NPCs 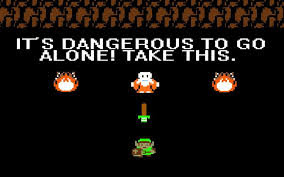 So you’ve created your campaign world and your players are itching to get down to business. Things looks like they’re going well, until it hits you that the area you’re PCs are starting out in is two-dimensional. Don’t fret, we’ve all been there. The whole “you find yourself in the local tavern and uncover rumors about location or event x” is one of the most common ways to start a game, but is it always the best? There comes a point where this trope is far too passé, and players will not feel much investment in the setting. Worse yet, NPCs in these sorts of scenarios are all too often little more than media through which exposition can be given to the PCs. In a video game, this is totally fine, but for table-top roleplaying, this will leave your setting feeling bland and unoriginal.
The only way to get past this is to develop your NPCs as three-dimensional characters. This seems like it would be a lot of work, but as the GM you can approximate who your player characters will encounter in the early days of their adventuring lives. In this article, I intend to help you flesh out your NPCs a little more. This is a process that seems like it will always take a lot of time, but with the steps I am going to outline below, I am confident that you will be able to flesh out a good percentage of any given town before your game even starts.
I know what you may be thinking: “why even do this, aren’t my players just going to turn into murder-hobos anyway?” Sure, that is always a possibility, but by fleshing out your NPCs, you are more likely to develop a setting the characters can feel more enveloped by. If the bartender at the local tavern has an actual personality, players are more likely to interact with him/her when they come to town. Ultimately, there is one goal every GM should work to achieve: make the local area as ripe for continuous adventure as is possible. This is most easily attained if the players feel a desire to interact with the local inhabitants. Plus, if you have your NPCs well fleshed out, it will not be so harrowing for you when you players inevitably go off the tracks. The easiest way to keep track of all of this is to keep the information below for each NPC on a notecard or document of some kind that you can reference when you need.

The first place to start when detailing your NPCs is to establish who is who within the locale in question. What shops and services does the area have? What sort of government presence is there? Are their barracks in/nearby the town? What is the approximate population? As I have discussed earlier in my article about in-game economy, the size of the population is going to have a dramatic effect on what the economy is like and what services are offered. A relatively small farming village may not even have an inn due to the infrequency of visitors. Once you have figured out exactly what sort of locals would be in the area, it is easier to narrow down who the player characters will interact with. Remember, in the early days of your campaign, only flesh out what is necessary, and spend time when your players are adventuring to work on the other NPCs. This is also the proper time to name those NPCs. For example “Brak Dindale – bar-keep”.

Since NPCs are people, they should possess personality traits and a basic appearance. This doesn’t need to be too detailed, but it should be there. Details like hair and eye color, complexion, build, and personal ticks do a lot to make your players view NPCs as people worth interacting with. All of this should be something you can sum up in one to two sentences. For example “Brak Dindale is a short, round man of ruddy complexion with brown hair and grey eyes. The local bartender, Brak is eager to hear news of the outside world, and sports a boisterous and jovial full-body laugh.” As you can see, in relatively few words, you have given your NPC a lot of personality and relatability beyond “Brak is the local bar-keep.” Also, by throwing in a detail such as “Brak is eager to hear news of the outside world…” gives the NPC an intrinsic motivation to want to interact with your player characters.

Relationships are one of the most defining characteristics of personhood; we all have them. While it would be downright ludicrous to suggest you flesh out how every member of the community your players are in know each other, establishing two to four relationships for each NPC can do a lot to help you build a narrative. If nothing else, this will help you establish how willing different NPCs are to help the party when they are on a mission from any given NPC. Just like an NPC’s appearance and personality, these do not need to be long statements, but rather one sentence per relationship to flesh out how NPCs will react with one another. This will go a really long way to painting the picture of a real locale; one in which players can really lose themselves.

By way of example, let’s turn back to Brak the barkeep. His relationship statements may look like this: “Brak views Eileen (the barmaid) as a surrogate daughter, and will go to great lengths to ensure her well-being. Brak and Anders (the local captain of the guard) have been friends since childhood, and are fiercely loyal to one another. Brak feels exploited by the taxes levied by the Duke of Arnegrem, and would support the duke’s deposition if push came to shove.” In three sentences, we have a good understanding of Brak’s place in the world.

Motivations
Desires are, as far as I’m concerned, an inherent part of consciousness. We all want something, or are driven by some belief or cause. If you want your NPCs to seem real to your player’s, they, too, will need motivations. These can be as broad as their religious beliefs or as specific as short-term career goals. Either way, these motivations will help you figure out the various factions in your locale, for there are inevitably factions. Between motivations and relationships, you can really give yourself an idea of who is allied with whom and why. This can also be interesting if an NPC’s relationships are at odds with his/her motivations. Again, and NPC should have between two and four motivations which can be summed up in a single sentence. Again, let’s use Brak as an example: “Brak dreams of holding the position of alderman on the city council. Brak would like to increase the frequency of travelers to the town in order to bolster his business. Brak is a devoted follower of St. Cuthbert and regularly tithes to the local temple.” In about the space of a paragraph, we now know a lot about Brak Dindale, and this will aid in making him a more relatable character for the PCs. Knowing these different facets of his personality, the GM can make informed and consistent decisions in regard to Brak’s interactions with both the player and non-player characters.

Strong on his mountain (er…at his desk),
PJ
Posted by Peter Foxhoven at 5:00 AM