"I am part of that power which eternally wills evil and eternally works good.” - More thoughts on magic in sword and sorcery settings 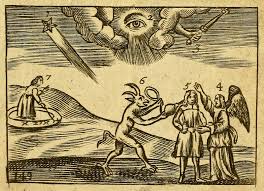 Just when I think I have exhausted the subject of magic in a low fantasy setting, I come to the realization that I have over looked a few things. If your game is like mine, there are powerful sorcerers out there waiting to be foils for your player characters. While you do not want the magic to be too prevalent, these sort of adversaries have a rich history in sword and sorcery literature (Xaltotun, Thoth Amon, etc.), and make for some really engaging adversaries for your PCs. But whence does their magic come? Does the existence of this kind of magic entail that player characters can gain access to it as well? How do you maintain balance? The easiest way of answering these questions is to look at some different sources of arcane power.

The source of magic that is the least likely to upset game balance is magic in the form of alchemy. Generally speaking, the alchemist will be able to craft potions and salves from rare and quasi-supernatural materials. While this sort of individual will be rare, players should be able to find them in the larger cities and isolated places of the campaign world. Befriending an alchemist can be a great boon to the player characters, because it will allow them to have some access to potions outside of stumbling upon them through the course of the adventures. 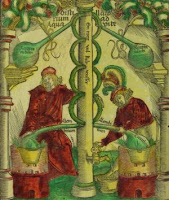 Like most practitioners of the arcane, alchemists should jealously guard the secrets of their craft. Further, these individuals are probably not trusted very much by the general population, find themselves to be pawns in the machinations of political figures, or even outright persecuted by religious sects. As such, an alchemist is likely to be wary of the player characters, and may take some convincing when it comes to offering aid. More on alchemical items later on in an upcoming article.

Bargaining for, or simply being imbued with arcane might by, a powerful supernatural entity is another of the more common ways to gain magic abilities in this sort of setting. The individual who has made such a bargain is likely paying a terrible price for it. This is distinct from the warlock class, because the price of this bargain should be far more immediate. The practitioner should become instantly corrupted or enthralled to the entity, or have some very specific prescriptive actions that they must take. Even the summoning of the entity may be dangerous for the would-be magic user and is not something that should be undertaken lightly or easily. 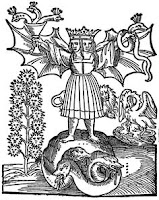 Not all of the entities will need to be malicious, however. In a tribal society, this sort of arcane user is likely the local shaman or witch doctor, and the various spirits (loa) served by the individual may have constraints on personal hygiene, dress, or action. Either way, this sort of magic should be relatively restrictive.

Another way to gain arcane knowledge in a sword and sorcery setting is to be a member of a clandestine cult of one kind or another. Entering into the cult should be exceedingly difficult, since cults are often distinguished from mainstream religions by being exclusive rather than inclusive. The process may be one that starts in childhood, but membership could also conceivably be gained via the performance of favors for the sect. Either way, once the acolyte has become initiated in the cult, it is unlikely that he/she will ever be able to leave of his/her own free will. Many of these cults will be illegal in many places, so participation is probably a closely guarded secret. While on face value, the cult seems like it would be the same as bargaining with an entity, I would argue that this is not so.

While it is probable that the leader (or inner circle) of the cult has gained power due to direct contact with a powerful, supernatural entity, the magic used by the rest of the sect is more likely to be a result of mental conditioning (hypnosis and psionic abilities), arcane knowledge, or ritual magic. The practitioners in a cult are not powerful or important enough to directly syphon power from an entity, but certain rights passed down through the ages may do just that. The key is that the average member of the cult does not understand how this magic works, but rather assumes its efficacy on faith alone.

An often overlooked source of magic is one which is derived from items of power. Whether it is a ring (think Thoth Amon), a gem, or some other artifact, magic derived from an item can be a fun way to keep players on their toes. The assumption most of the time when a PC encounters a magical adversary is that the opponent has this power inherently. By allowing the antagonist to be potentially separated from the source of his/her abilities, the game master can make a seemingly unstoppable enemy more easily vanquished.

This also allows the players the opportunity to do some detective work in order to discover the source of the villain’s power. The item could be anything from a portable object to a large obelisk that allows the knowledgeable to tap into and manipulate its energies. This object could be forged by an ancient civilization, come from beyond the stars, or simply be a natural feature of the campaign world. Either way, the user will keep this object close whenever possible, and will take great pains to ensure that no one uncovers the secret of his/her power.

Studying the heavens is a wonderfully thematic way to gain mystical powers. When certain stars are in alignment, gateways to cosmic powers and otherworldly realms could open up, and it would just take someone knowledgeable to exploit this. While this is unlikely to be the sole source of the user’s magic, it is a perfect source for magic from the schools of divination and conjuration/summoning. Using the cosmos as a guide for this kind of magic should be complicated and fickle.

The timing of any ritual or spell would need to be precise in order to gain the desired effect, and the fallout from botching such timing (especially when summoning creatures) should be dire indeed. The pay-off for successfully completing this kind of casting should be immense, however, since stars should only be right in the necessary way at most once a year. The more powerful spells should require cosmic alignments that happen once every lifetime or even aeon. While impractical in most respects for player character spell casting, this is an ideal way furthering the machinations of a magic using antagonist.

Probably the most common way of gaining magical power in Dungeons and Dragons, tomes can be an easy way to transmit magical abilities to player and non-player characters alike. I would urge the Dungeon Master to not allow for magic gained from such a source to be immediate, however. The ability to spontaneously cast spells should come from one of the sources listed above, in order to make the casting of spells from tomes as laborious and ritualistic as possible.

The assumption behind an arcane text (assuming it is not written in a magical alphabet) is that any person literate in the source language should be able, with time, to unlock its secrets. That makes tomes of arcane lore a potentially over-powered and altogether too easily accessed wellspring of mystical prowess. In order to keep this tendency in check, make sure that all of the spells in the tome contain the ritual designation, and, as I stressed in a previous post, rule that the only way one can cast the spell is as a ritual.

Strong on his mountain (er...at his desk),
PJ
Posted by Peter Foxhoven at 4:00 AM