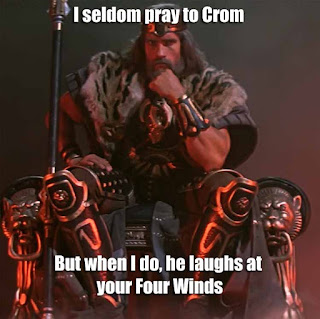 We all have had to deal with problem players. Heck, most of us have probably been a problem player at one time or another in our lives (of late, I am given to rules-lawyering). There have been a lot great articles and such written on the subject of how to deal with the issue of the problem player, but upon perusing various role-playing groups I feel that people default to “boot the player” far more often than is good for the game. We exist in a golden age of nerdery; people actually want to get into this stuff.
With the expanding participant demographics, it is only logical to assume that people with differing tastes, desires, and expectations of what is or is not appropriate in a roleplaying game are going to come together, and contention and strife can be expected as a result. Individuals that come into tabletop roleplaying from MMOs are going to have different ideas about how the game should be played then someone coming to gaming from a roleplay by post background. The depth of character development, the manner in which treasure is divvied out, and the very style of play are all likely to be different. Heck, after forty years of game design it is hard to find two veteran tabletop gamers who view these things the same way. Ever had an OD&D grognard and a 3.X fanatic in the same party? Things get real messy, real fast.
I am not going to attempt to identify the different types of problem players and give novel solutions for their behavioral issues here. That topic has been done elsewhere far better than I ever could examine the subject. If you are interested in this, it is my (in no way) humble opinion that the Vampire: The Masquerade Storyteller’s Handbook covered this subject the in the most complete and useful way ever published. In this article, I would like to attack the problem at its source by talking about what is likely the most overlooked aspect of your game: Session Zero. So, my stalwart reader, let us dive in and explore how we can avert (to the best of our abilities) the problem player.

Genre
Okay, so this one probably goes without saying, but the first thing your group needs to decide is what genre they want to play. This seems easy at face value, but different players come in loaded with conflicting concepts about what each genre entails. Say we are playing in a science fiction game, how expansive do we want the universe to be? Is space travel easy or difficult? Is the future expensive? How vast is the playing field? Is it galaxies, star systems, or as small as the immediate planets around the characters homes? Are their extra-terrestrial species? I could go on like this forever.
Regardless of genre, these issues (or their genre equivalent) will come up, and, in my experience, a large amount of problem player behavior stems from a fundamental misunderstanding about the confines of the genre being played. Before you talk about anything else with your players, make sure that this topic has been properly exhausted. Don’t let pencil touch character sheet until everyone understands and, most importantly, has agreed to the conceits of the genre in which you are working.

The distinction between running a rules heavy and a rules light game is another important way to stop problem behavior before it begins. Everyone hates rules lawyers, heck I do and I often am one. There are some times when such a thing can be very helpful, however. In a campaign (or system) where there are rules for every conceivable circumstance, it is almost impossible for one person to keep all of them straight. As such, if your party is committed to obeying printed rules, having a rules lawyer player is pretty useful.
By the same token, if you and your players enjoy the sort of free form gaming experience that comes with playing in a rules light environment, this sort of behavior is anathema to the culture of the game. For the sake of time, it is often easier for the Dungeon Master to simply make a ruling and move on than it is to spend time pouring over rulebooks to find the printed mechanic. Some players may not like this “fast and loose” approach, however, so if you are the kind of DM who prefers this, it is important to get that out in the open before play even begins. By discussing this in session zero, you can avoid future arguments about “what the book says,” because you were able to establish parameters as a group for how to adjudicate these circumstances.
Be aware, though, that you should take notes about what rulings you have made so you can stay consistent. Even players who have agreed to a rules light style of play will begin to become upset it there is a lack of consistency in the game. Dungeon Master fiat is powerful and, not to sound like Uncle Ben, with great power comes great responsibility.

I like a good dungeon crawl as much as the next guy. I mean seriously, this is probably how majority of us (especially people that started gaming in second edition or earlier) began their roleplaying careers. The endless onslaught of monsters and treasure is, in many respects, the backbone of Dungeons and Dragons and those tabletop games that emulate it. Not all games are like that, however, and even within a system that lends itself well to the dungeon crawl, not all players enjoy this style of game. If you have player that rolls a character who is particularly suited for social circumstances, you are going to have a lot of problems with that player if all the party does is hack and slash their way through a labyrinth of antagonists.
As much as is possible, establish before the game starts where you want the balance of play to be. Some groups may only see combat as a means to further more interesting roleplaying experiences, and if that is the case, combat should not be the major focus of the campaign. Not every Dungeon Master, by the same token, is comfortable crafting the elaborate campaign setting necessary to facilitate a more conceptual game, and that is alright too. Session zero will often reveal that the gaming group is not well suited for each other, and learning this early can save a lot of time and frustration in the long run.

World-building gets overlooked a lot more than people realize. We often take for granted that the Dungeon Master has his/her campaign world all laid out, and that we as players just need to be dropped into this extant world of imagination. Often, however, players want to feel more invested in the campaign setting, and this is facilitated by allowing them to have some input into the various cultures, countries, and geography of the world.
It is perfectly fine if you come to the table with binders full of history, political factions, geographic features, and endless maps, but this may make players feel like they have little reference for the goings on of the campaign setting. Even if you provide your players with a primer on the setting, it is highly unlikely that more than a couple (if any) of them will actually read it. If you want your game to be immersive, allowing players to add their own ideas to the world can help them feel invested. This is not going to be the case for every group, so it is necessary to talk about it prior to character creation.

Taboos
I have saved what I feel to be the most important aspect for last. More games become derailed and hostile because of a disagreement on what is or is not proper subject matter during play than any other reason. Recently in a D&D Facebook game I follow, the subject of rape reared its ugly head. As the thread grew and became more hostile, I realized that this is a great example of the kind of behavior that needs to be specifically talked about prior to play commencing. I am sure we have all been in a party where one player acts in such a way as to make us feel profoundly unsettled, uncomfortable, or afraid. Given that gaming is supposed to be a cooperative and enjoyable experience, it is best for everyone that a culture of mutual understanding is cultivated.
Even though you are playing a chaotic evil character, it is important to understand that your desire to decapitate the goblin baby is likely to make someone at the table uncomfortable. For people that have been through traumatic experiences, the description of a particularly violent act could open up a veritable Pandora’s Box of memories that they are having difficulty not reliving to begin with, and by bringing them up you have ruined the escapist nature of the game for them. So please, talk explicitly about what are and are not acceptable topics at your gaming table with your players. If someone states that a certain thing unnerves them, don’t demand justification and don’t push the subject. Remember, we are all here to have fun and leave the table feeling better about ourselves than when we sat down at it. Don’t be the person that takes that away from someone.

Strong on his mountain (er… at his desk),
PJ
Posted by Peter Foxhoven at 10:58 AM