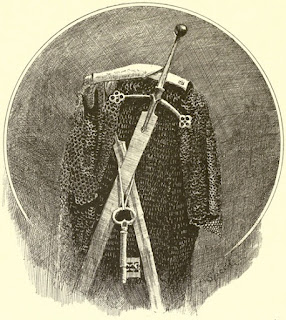 A few posts back I discussed how to make an anthropocentric,low-fantasy campaign. I touched in a very minor way about magic items, but at the time I felt like this is a subject that could be dealt with in greater detail. It is in this spirit that I turn towards the idea of magic items in a low magic, sword and sorcery style setting. While this discussion is not likely to exhaust the matter, it should give the prospective DM a good jumping off point and a way to appease his/her players when they inevitably complain about the lack of magic items.
I am not going to re-plumb information I have already written about, so instead I will attempt to offer up something new for the consideration of the reader. The first thing to remember about magic in this sort of setting is that it should be rare, powerful, and mysterious. When players find a magic item, they will not have a way of really knowing whether or not the item is or is not imbued with eldritch properties, because they will be unlikely to have a spell that can identify the item. This makes it so description by the Dungeon Master and experimentation by the player characters. I will go a little more in depth about the identification process in just a bit. Let’s jump in to some quick guidelines for magic items, shall we?

Make It Wondrous
The first guideline I follow is to make sure that magic items given out (aside from minor, alchemical items) are always wondrous in nature. Too often players find boring, quasi-mundane items (“ooh a +1 sword, how original…”). In a high magic campaign this is legitimate because of the sure multitude of magic items that are floating around in the world; heck you may even be able to straight up buy magic items. In a low magic campaign, by contrast, these items are not readily available and it can be very discouraging to the player characters to go through a taxing ordeal and only walk away with an item that grants a strictly numerical advantage over what they were previously wielding. It is for these reasons that I propose that the Dungeon Master give out Wondrous Items. While most of them will not be weapons or armor (we’ll talk about that later), they are always items of legendary power and great utility. Would the thief like a +2 rapier? Totally. Would a gem which prevents the thief from being detected by magical means be more epic and amazing from a story stand-point? Unequivocally yes! Besides, giving players something which makes their character truly unique in the world and which allows them to role-play creatively is, in my opinion, intrinsically valuable in a game like D&D (or OSRIC, DCC, LL, BoL, etc., etc.).
Eschew Magic Weapons and Armor
This is the guideline I anticipate getting the most blow-back from. People love magic weapons, and, ultimately, what is not to love? They are sleek, cool, and help you kill monsters better; every warrior's dream. But do they really fit in a sword and sorcery setting? While I am sure we can all think of S&S characters with epic magic weapons (Elric much?), I remain unconvinced that they strictly fit into the setting. Generally, the S&S setting is all about a human character overcoming magical or supernatural obstacles with little more than grit, strength, and good, old-fashioned tenacity. Having said that, it is nice to give players a numerical bonus to hit and damage, especially when a majority of their foes will have resistances to non-magic damage starting at around fifth level (in 5e). So allow me to propose giving weapons qualia which give them a +1 - +3 without making them magic. I will break theses into four levels in ascending order: masterwork, heirloom, legendary, and mythical. I will often use the word “weapon” in place of “weapon or armor”, because having armor of these qualities will be so cost prohibitive that it is unlikely a character will be able to afford the commission of one. Finally, weapons of superior quality should be given names. This adds to their flavor and prestige.
Masterwork: A masterwork weapon is non-magical in nature and is the product of a particularly skilled craftsman. The weapon confers a +1 to hit and damage because of the way it has been forged and the superiority of its balance and edge. A weapons of this quality should cost no less than ten times the amount of the normal weapon type. Hrunting, the sword given Beowulf by Unferth, is good example of such a weapon.
Heirloom: An heirloom weapon confers a +2 bonus to hit and to damage, but remains non-magical. This is a weapon made by the sort of smith that only comes around once in a generation, and as such should be incredibly hard to come by. Those who possess such a weapon likely hand it down to their heirs, or lose it in battle with a superior force. Should a player seek to commission such a weapon, it should cost no less than one-hundred times the standard cost of the item, and require some searching to find the artisan capable of crafting such an piece. Beowulf’s sword Nӕgling given him by Hrothgar is an example of such a weapon.


Legendary: A weapon of legendary quality is one that is, in fact, quasi-magical in nature. Conferring a +3 bonus to hit and damage, a legendary item is one that comes into being perhaps once in a lifetime. It is likely made out of esoteric or rare material, made by the greatest craftsman of the age, or both. Acquiring such a weapon should always involve a quest of some sort; whether one seeks an extant item, the material to have it forged, or the artisan who can properly forge the item. On the off chance one wants to commission such an item, it should cost no less than one-thousand times the price of the normal item. Sigurd’s sword Gram with which he slew Fafnir in the Völsungsaga is an example of such an item.

Mythical: A mythical weapon is one that is literally magical in nature. The item does not just confer a “plus” to hit and damage, but contains other properties as well. This sort of an item is one that cannot be forged by human hands (without the aid of powerful magics) and must always be received as part of a quest or adventure. A mythical sword should ignore magic resistance (at least to a certain level) and have other abilities. It is likely that such an item will have an intelligence of its own because it was formed by unearthly means. These items can never be bought with normal currency, but boons, souls, and other more esoteric means may be used to acquire them. Again, I stress that these weapons should have qualities beyond a simple “plus”. Elric’s sword Stormbringer is an example of such a weapon.