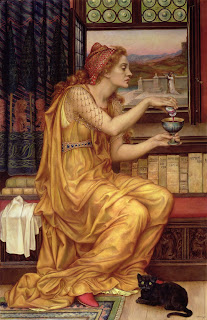 Since I earlier discussed alchemy as a source of magical power in a sword and sorcery setting, I feel it is pertinent to talk about the kind of items an alchemist (or witch, shaman, etc.) may be able to provide for your players in a low fantasy setting. I am not going to talk about items of necessarily great power, because, as discussed already, those should be relatively few and far between in your game. Further, I would draw the general distinction between what can be made via alchemy and its lower magic cousins from the traditional crafting of magical items is the consumable nature of the item.
I would caution against giving any alchemical item the ability to recharge its abilities; an item with such a property should be the result of magic on a more grand scale, and should absolutely not be available for purchase. Alchemical items can be grouped, I believe, into the following groups: mundane, quasi-mystical, and supernatural. Before I jump in, just one more caveat: alchemical items should be expensive. If you are going to include items like this for sale in a low fantasy game, I encourage you to adopt some of the suggestions from my post on in game economy.
The Mundane
Some of the items that alchemists will be able to produce will be mundane by the standards of people such as ourselves that live in a highly technological world. The thing to remember is that in a world where the vast majority of people are illiterate and toiling in very labor intensive agricultural occupations, knowledge that does not directly tie in to someone’s day-to-day activities is a luxury that few possess. In this sort of backdrop, anything requiring years of study to accomplish would be quite the feat indeed. Let’s look into some of those items.
Healer kits
While magical healing is very rare in a low fantasy world, there have always been medicines. A healer’s kit would simply be an assortment of balms, salves, and herbal remedies which, when applied to the player character, will expedite the healing process. A generous DM may make it so the application of these kits will heal 1d4+ half the level of the alchemist hit points when used. If however you intend these items to not be instantaneous, I recommend sticking to increasing the amount of hit points healed per day (say two or three per day as opposed to just one). Either way, if you want to keep the threat level of your campaign consistently high, enforce the ruling that uses of these items do not stack and can only be used once per day.
Specific Cures
Whereas a healer’s kit will help with the scrapes and cuts someone accumulates throughout an adventuring day, if a PC were to come down with the some kind of serious (non-magical) affliction, a more specific cure may need to be purchased. If you have a PC that has been poisoned, succumbed to the elements, or been stricken with a disease that is not fundamentally magical, an alchemist should be able to provide a cure. These cures should never be instantaneous, however. If a player character contracts a mundane disease, he/she should anticipate having to spend days in bed while the treatment is being administered. If the disease has a cumulative list of effects, these should stop accumulating upon the first use of the cure. It seems reasonable that every day of bed rest and treatment will reverse one effect of the illness. The time needed (and thus money spent) on the cure should be dependent upon how far the illness has advanced.
Poisons
Incredibly dangerous, difficult to procure, and undoubtedly illegal, poisons are among the main reasons that the common person (and the local government) would be weary of alchemists. Poisons should always be made out of rare and expensive materials, otherwise the players are likely to become too apt to employ them, thereby upsetting game balance. Because of the highly volatile nature of poison making, the process should take days for an alchemist to complete even if he/she does have the all of the necessary component on hand. In general, however, an alchemist will not have the materials to make any/every kind of poison the desired by the player characters, though he/she may possess most. If a player character does want to have a potent poison produced by the alchemist, mere payment will not suffice (though it will definitely be a component). Characters will have to first earn the trust of the alchemist and then complete a side-quest wherein they get the necessary alchemical reagents needed to produce the poison. Depending on what is needed, this could force the PCs to travel great distances or deal with unscrupulous characters.
Narcotics
In much the same way alchemists can produce poisons, they are likely able to refine various narcotics. If your player characters need to drug someone with the extract of the purple lotus, for instance, an alchemist is definitely the person to seek out for such an item. For the same reasoning as with poisons, narcotics are going to be difficult to come by due to their likely illicit status. The again, the player characters are likely going to have to come up with the material components on their own, as well as gain the alchemists trust and pay a hefty fee.

The Quasi-Mystical
Potions and items of this nature of the kind of thing that allow characters to achieve greater than average feats. Anything than can impart greater than average strength, celerity, or endurance falls under the “quasi-mystical” umbrella. A potion that allows someone to go longer without food or water would also fall under this auspice. The effects of these sort of items, however, should not be potent enough to replicate actual spells.
The Supernatural
The final category of alchemical items are those that actually replicate the effects of magic. Healing potions and magical cures are some of the first that come to mind, and are likely the most common of the supernatural alchemical items. It is possible, however, that an alchemist with the proper time and reagents could produce other magical potions such as those which render the user invisible or mimic enchantment spells. One-time use oils that temporarily increase the accuracy and/or damage of a weapon would also fall under this category. These items should be exceptionally cost-prohibitive even by alchemical item standards.

Strong on his mountain (er...at his desk),
PJ
Posted by Peter Foxhoven at 9:10 AM