Bloodrage: Get ready to have your face Ragnaröked off!


My name is PJ, and I am a board game addict. I am sure that many of you can sympathize with my delightful addiction, since board games are getting more fun, stylish, and high quality every year. With the advent of crowdfunding, the amount of awesome new hobby board games seems to be growing out of control every single year. As my wife (with great chagrin) can attest, I have a tendency to go completely off the deep end when it comes to backing board games on Kickstarter. And now we come to another confession: I threw over five hundred dollars at the Conan game by Monolith. I know what you’re thinking internet, but “nerd need” is a real thing. Not long after Conan had its Kickstarter, a little game called Bloodrage made by the same folks that produced Zombicide (you don’t even want to know the kind of money I threw at Black Plague, honestly) had a campaign of its own. 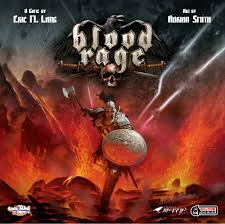 I did the normal song and dance that I do with anything sufficiently Norse themed: I told myself I was not going to back it, I then clicked the watch button, I then waited a whopping two days at which time I backed the project. At the time I told myself that I had to because Monolith announced crossover content between this game and the Nordheim expansion for Conan. “Surely,” I thought, “I have come too far to not go all in, right?” So, of course, I backed the game. Not long ago, it came in the mail, and it is an absolute gem. My D&D group and I wasted little time trying it out, and I could not endorse this game passionately enough.

Ragnarök is here. The nine worlds are being devastated by Norse Armageddon, and the few remaining Viking tribes have one last chance to die in glorious combat before it’s all over. Using their considerable might (as well as the aid of mythological creatures) the clans in Bloodrage vie with one another to pillage the most territories over the course of three ages hoping to win glory or spend eternity(ish) in Valhalla. Sometimes, the cataclysmic destruction of a province will wipe out players’ forces thereby giving them even more glory; for what is more glorious than dying in Ragnarök?

How it goes down.

Play takes place over the course of three ages, with multiple phases in each phase. Players begin with symmetric forces, but this quickly changes due to the process of drafting that begins each age. The ages each have their own deck of cards, of which eight are dealt to every player. These cards themselves can be broken down into three types: combat bonuses, clan upgrades (including monsters), and quests. After the cards have been dealt to each player, everyone selects two from his/her hand passing the rest to the player on the keft. In this way, players are able to customize their clans. There are enough cards to ensure that each game will present different option for a given player, so the replay value of Bloodrage is exceptional.

Bloodrage focuses far more on strategy than luck, so no dice are used in the game. Rather, players have a clan sheet which depicts certain attributes (amount of rage, amount of glory gained for winning battles, and the number of figures the clan may have on the board at one time). When engaged in battle, it comes down to comparing clan strength in the province and combat cards played, with the highest value dictating the winner. By completing quests and pillaging provinces, players are able to increase their clans’ different attributes, making it so clans become more powerful between ages.

Players take turns taking actions which all have an associated rage cost. Once every player has run out of rage (or all provinces have been pillaged) the action phase ends, and players determine whether or not they have completed any of their quests. After this, dead heroes return to the players’ supplies from Valhalla, and a province is laid waste by Ragnarök making it unavailable for the rest of the game. By the time the third age rolls around, significant territory is no longer available to be pillaged which forces players to become increasingly hostile towards one another as time goes on. In the end, the most clan that has attained the most glory is victorious. Sound simple? It is. This is a game that is easy to learn and a blast to play.

Mechanical simplicity: Simple battle mechanics may be the main reason I enjoy this game so well. I have a lot of board games, and often the sheer mechanical density of the strategy/warfare board games can be a huge barrier to entry. I have a lot of games that have sat on the shelf for months before I get around to playing them (War of the Ring, for instance) simply because it is hard to convince others to invest time into a convoluted game that they may not even end up enjoying. The simpler the rules, the easier it is to jump in the uninitiated, and that is always a good thing.

Replay value: Straight out of the box, Bloodrage has enough different options to keep the game fresh every time you play it. The drafting mechanic makes it so it is unlikely you will start with the same cards in any given age. On top of this, Bloodrage has completely different mythological beasts, as well as combat cards, and quest rewards and conditions in each of the three age decks. That’s right, guys, every age is different. Throw in the fact that expansion material that adds new mosters, clan mystics, an extra player, and even the Norse gods themselves give players so many options, that it would take a concerted effort to ever reproduce the same game.

Miniatures: The easiest way to get a D&D nerd such as myself to back a game like this is to include well crafted, properly scaled miniatures. Bloodrage does just that. Not only are the regular clan pieces the perfect size for medium sized creatures on a battle mat, the larger ones (like giants and trolls) are accurate for large sized creatures. Even if you do not find the game to be enjoyable (an unthinkable proposition in my book) the sheer amount of miniatures you receive makes the retail price totally worth your while.

So do yourself a favor, internet, and check out this most glorious of products.

Strong on his mountain (er…at his desk),
PJ
Posted by Peter Foxhoven at 2:16 PM